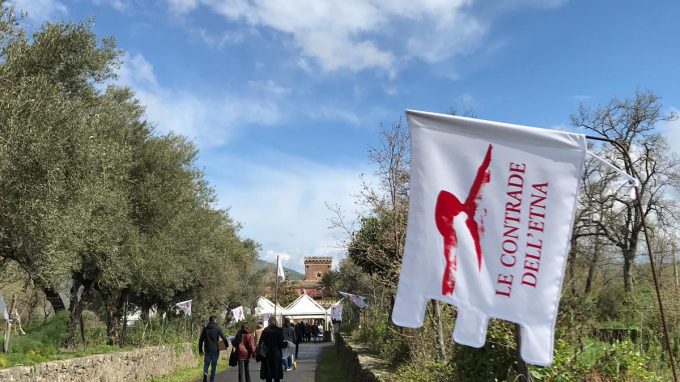 Just back from Etna and the buzz & excitement of the ‘Contrade dell’Etna’ 2019 tasting, which took place in the Castello di Romeo in Randazzo, showcasing current and future releases from across Etna. The Contrade are small areas (within the larger Frazione) on Etna where vines are grown, and each is determined by a number of elements including altitude, soil, exposition, and microclimate.

There’s something truly magical about Etna. The views are dramatic, with vines perched on slopes from 450m up to 1200m asl, the snow-capped volcano above, the sooty black soils beneath, and the shimmering blue of the Mediterranean in the distance. Then you have the delicious food, the musical language, and the warm and spirited souls of the people. Unsurprising perhaps that the wines are also enchanting! The culture of wine making here is ancient, and many of the vineyards today date back to the early 1900s, pre-Phylloxera (apparently the mineral-rich soils helped to ward of the Phylloxera bugs!) It never ceases to amaze me how these old and gnarly plants can give birth to vivacious wines of such beautiful purity, finesse, and power. There must be something in the lava…….and its catching! The Etna DOC was only created in 1968, and 20yrs ago there were very few producers of quality wines on Etna (hardly more than 10 I was told). Today there are apparently about 150, and a high percentage of the growers are from the Etna region itself.

At the ‘Contrade dell’Etna’ it was fascinating to compare the Etna reds and whites from the North, South, East and West (thought interestingly, the Etna DOC does not cover wines made on the Western slopes). In truth, it was tricky to identify key traits belonging to each Contrada, this still being a relatively young and undeveloped concept, but easier instead to identify those belonging to the wider geographical areas, with many factors to consider. Firstly, the altitude, which is normally limited to maximum 850m asl for Etna Rosso DOC and Etna Bianco DOC (though it depends on slope), with many excellent wines being made at significantly higher altitude. Next, the Lava! Alberto Graci suggested that the main difference in the soil depends on the age of the lava, rather than its composition. Etna is the largest active volcano in Europe, and has destroyed working vineyards before, most recently during its latest eruption in 1981, when some San Lorenzo vineyards in Randazzo were engulfed by lava. Rori Pasaliti of SRC Vini said that more recent eruptions have left a sandier and more fertile top soil, however the differences can only really be noticed after a substantial amount of time (a thousand years or more….!) Stephanie Biondi from Ciro Biondi winery commented that the North side of Etna is on old lava flows, whereas the South side is on volcanic cones. Another grower at the event, Federico Curtaz, suggested that there is a philosophical element to the volcano’s power too; the possibility of an eruption at any moment making growers strive to do their best every day, with the towering peak of the mountain reminding them to aim ever higher!

Other key influences include the vineyard exposition, the air, and the microclimate. There is the influence of the sea in the South, and the cool mountain air in the North. Harvest tends to be earlier in the South, with more plentiful heat from the sun, though at the same time there is more rain to maintain freshness – especially key in hotter vintages. The Northern slopes are generally recognised as top sites for reds. Having tasted from various growers at the event, it could be said that the reds on the Northern side are more serious, benefiting from a cooler climate, and larger diurnal temperature range, which allows the vines respite in the evenings, preventing them from overheating, and preserving that archetypal freshness and acidity that is so loved about Etna wines.  The South/South Eastern slopes are generally recognised as top sites for whites (the Contrada of Milo is home to the only Etna Bianco Superiore DOCG). Whites from these areas appeared to be a little saltier and more herbal than their notably floral Northern counterparts. Stephanie from Ciro Biondi suggested that the whites from the south are crunchier, flintier and more laser-like in acidity. The Southern slopes are still relatively undiscovered though, with 85/90% of Etna wines being made in the North.

It seems to me that Etna is a climate that nurtures a sort of super-vine! Not only do the vines give birth to extremely age worthy wines, but they are often disease resistant too! Rori Pasailiti explained how his vineyards in the Randazzo Contrada of Calderarra and the Castiglione di Sicilia Contrada of Crasà do not have any chemical treatments whatsoever. There is no smog, no pollution, just the pure mountain air, and the mineral rich soils, lending themselves perfectly to organic agriculture, and creating an environment so rich in biodiversity that the plants appear to be naturally disease resistant.

In terms of the distinct differences in terroir from one Contrada to another then, although they may strive to one day be compared to Langhe/Roero MGAs, there is still some way to go, but it’ll be an exciting journey to follow!

Below are some of my standout wines from the tasting (2018 vintage was balanced, easy, and relatively cool, with no great hot spells or wet spells, and 2017 was warm, with almost no rain at all and a very hot Summer):

SRC, 2018 Alberello Rosso: tasted April 2019 from tank – due to be released in 2020. Single vineyard Nerello Mascalese, from 100yo vines up at 650m asl in the Contrada of Crasà in Castigllione di Sicilia (North Etna). The perfume a little closed at first, but then slowly opening in the glass. So pure, bright, and high toned. Affinamento in cement only. Essential oil, roses, raspberry, wild herbs, alpine fresh, elegant and so fine. Stunning.

Ciro Biondi, 2018 Etna Bianco DOC ‘Outis’: tasted April 2019 tank sample. Blend of grapes from older parts of the vineyards in Tre Castagne, from the Contrade of San Niccolò and Ronzini (South East Etna, on the volcanic coast). Stainless steel only. Mainly Carricante, some Minella and Cataratto. Very salty fresh with herbal and citrus notes, lemon verbena, wild thyme, so pure. On the palate saline, taught and cleansing, with a racy spine of mouth-watering acidity, and lovely texture.