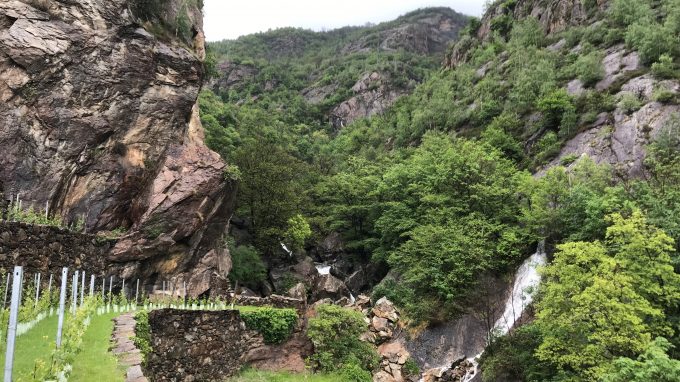 Nebbiolo & a Snapshot of Piedmont’s Patchwork of ‘Terreno’

On our last trip to Piedmont it was fascinating to taste so many different expressions of Nebbiolo, especially from the re-emerging and captivating region of Alto Piemonte, as well as from the Roero, and the Langhe itself.

First, we visited Chiussuma, in Carema. Ok technically it is not in the official ‘Alto Piemonte’ appellation, but it feels like it ought to be, at approx. 100m directly North of the village of Barolo, and only approx. 50m West (and a little South) of the famous Bramaterra appellation of Alto Piemonte. Also, it is certainly high altitude. The landscape here is dramatic, strikingly beautiful, and a bit prehistoric (see cover photo). The Chiussuma vines are perched up at 600m asl, pergola trained across old granite columns against a backdrop of ragged rock faces, the surrounding mountains cloaked in mist when we visited on a late May afternoon. The soil here is poorer and rockier than that of the Langhe, made up primarily of granite/mica, carried up the steep slopes from the valley bottom. It has low potassium and low Ph, so good acidity. The grapes undergo slower maturation due to less sun. The diurnal temperature range helps the fruit maintain freshness and aromatics, whilst allowing it to fully ripen during the heat of the day. The rocks retain heat creating a microclimate, and it never freezes here! The Carema 2017 from Chiussuma was the standout wine for me – a blend of Nebbiolo plus 10% ‘Neretti’ (local black grapes): So bright and lovely. Really juicy and sapid. Fragile and long, with lots of crunchy red fruit on the attack, raspberry and wild strawberry, as well as some brooding darker fruit in the background. Gorgeous! Gently spiced, the 3rd Use Tonneaux giving a subtle framing without interfering with the fruit.

Next, we crossed over East to the ‘real’ Alto Piemonte, to visit Mattia & Odilio Antoniotti’s Bramaterra vineyards, found North West of the Alto Piemonte region, on the West bank of the river Sesia, in a wilderness of thick forest and vegetation, dotted with vines. It used to be a thriving wine producing region in the early 1900s. Then many of the young people left during the industrial revolution, and the vineyards were neglected and became engulfed by the forest. Today it begins to return to its former glory! The soils in Alto Piemonte are generally younger, rockier, more acidic and richer in minerals but less fertile than the Langhe. The soil in Bramaterra is volcanic! Pink Porphry rock with veins of rose quartz and limestone, producing extremely pure and concentrated wines. Gattinara and Bramaterra are both volcanic and acidic but Gattinara is rich in iron. Bramaterra and Boca have less iron and more manganese. Gattinara reaches higher altitude than Bramaterra, though the highest point (600m asl) is not planted to vines. The 2016 Bramaterra from Antoniotti was just stunning: perfumed and high toned. Alpine-fresh, wild herbs, rosewater purity, opening out to dark cherry, kirsch and cedar. Vertical, with very fine silky tannins, poised and compelling. Will be fascinating to see how it develops with age.

Then onto Sizzano, and Cantina Comero. Sizzano lies South East of Bramaterra, below Ghemme, and on the East side of the river Sesia. Gattinara and Ghemme may be the only DOCG in Alto Piemonte, but Sizzano is the oldest DOC: (1969). Farà and Boca are both Colline Novaresi DOC. The latter 3 appellations have more alluvial, soft and morainic soils. You can get some seriously good value wines here, often cheaper than other Nebbioli of similar quality. Frustratingly for producers, Sizzano can’t yet be declassified as Colline Novaresi Nebbiolo, but this may change. This zone is still quite undiscovered. The wines of Paolo Cominoli are bright and alive, from young vines with plenty of generous fruit. The standout wine for me was the 16 Sizzano: Pretty and fragrant, notes of cranberry and rose, quite relaxed and at ease. Finely grained tannins, lots of juicy red fruit and a lovely velvety almost creamy texture, gently sculpted.

Driving South East, we reached the Roero, which begins just above Verduno, the Northernmost village of the Langhe region. As Geology expert Dr. Edmondo Bonelli says, “One factor links together the three zones of The Roero and the Langhe: they have emerged on a geological substrate of seabed origin constituted by marls, sands, and calcareous sandstones. But within each production area are different geological formations as well, which generate different soils, each of which bears the imprint of the originating formation.” In the Roero the soil is mostly younger and sandier vs the Langhe. The sandiest soils are between 2 and 4 million years old. The Nebbioli tend to be softer and lighter in body and structure, with more gentle tannins, and a pretty red fruit character. Our visit to Alberto Oggero in Santo Stefano Roero was eye-opening. These wines are such a fine expression of place, with real lightness of touch. The 2016 Roero le Coste was singing: Vibrant red and peachy fruit on the nose with crushed rose petal. Very fresh and precise, and yet soft, with real lightness of touch, lots of matter and an expansive quality at the end of the palate. 16 was quite a balanced vintage, revealing a little more complexity vs 2017. Steel then tonneaux for 14 months. Very ‘classico’, almost Burgundian in style.

And finally, to the Langhe (Barolo & Barbaresco). To summarise very briefly (!), the sea evaporated earlier here, so the soils are older and harder than in the Roero. The Langhe topsoils of sand that still cover the Roero have been eroded over the extra millennia in the Langhe to leave the bare bones of clay & Marne in Barolo, whist Barbaresco is more influenced by the river action and soils, and by the Astijiani sand from the North East, as well as the weather from the Pianura Padana. The sandiest soils in the Langhe are 10million years old (over twice the age of those in the Roero)! And the famous Sant’Agata Blue Marl is 8-11 million years old (from the Tortonian age).

In Barbaresco we visited Manuel Marinacci in San Rocco Seno d’Elvio; a village that separates Barbaresco from Neive. It lies on a Blue Marl bedrock and has some clay and limestone too. It is much rockier than Roero, with less sand as it has all eroded. The marl gives minerality and depth, and soaks up the water, keeping the roots hydrated throughout the year. I loved the 2015 Barbaresco: Bright ruby red, clear and glistening. Balsamic and pomegranate. Quince, rosemary, thyme, silky, cleansing. Pretty, elegant but full. 1-month maceration and 30 months in botte grandi.

In Barolo we visited Fratelli Serio & Battista Borgogno, based in the heart of Canubbi. A standout wine for me was the 2015 Barolo Novello from the high, single Bergera-Pozzole vineyard in the comune of Novello, overlooking the river Tanaro below & the Maritime Alps in the distance, on heavier calcareous clay soils, steeply sloped and South facing: Lovely strawberry fruit nose, pot pourrit, floral scented. Very sumptuous, elegant, finely woven together. Fluid and harmonious, with some crunch, lift, and that energy you find across Emanuella’s wines, and with a spine of prominent tannins lending just the right amount of structure. 20 days fermentation and maceration in big barrel. Then into one botte of 49 HL for 32 months before bottled Summer 2018.